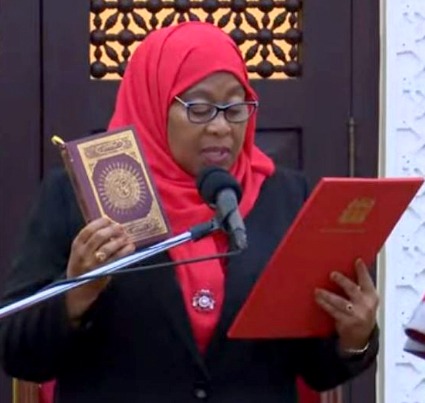 Samia Suluhu Hassan was on Firday sworn-in as Tanzania’s President following the death of late President John Pombe Magufuli who died on Wednesday.

In attendance during the short ceremony was former President Jakaya Mrisho Kikwete and Zanzibar’s Hussein Mwinyi.

Suluhu inspected a guard of honour mounted by the Tanzania Defence Forces.

Madam President later on addressed the nation and chaired her first Cabinet meeting.

She will serve the remaining term of Magufuli which started last October when he was re-elected.

Suluhu has been Magufuli’s deputy since 2015.

She is expected to nominate a Vice President from the mainland given that she comes from Zanzibar, in line with the Tanzanian Constitution.

“Where the office of President becomes vacant by reason of death, then the Vice-President shall be sworn in and become the President for the unexpired period of the term of five years.” The Tanzania Constitution states.

The Tanzania constitution also states that the same may also happen if a vacancy occurs due to resignation, loss of electoral qualifications or inability to perform his functions due to physical infirmity, or failure to discharge the duties and functions of the office of President.

After consultation with her political party, Chama Cha Mapinduzi, Suluhu will then propose the name of the person who shall be Vice-President.

Such appointment shall be confirmed by the National Assembly by votes of not less than fifty per cent of all the Members of Parliament.

Speaking after taking her oath of office at State House in Dar es Salaam on Friday, said during the mourning period, all Tanzanians should remain united as they focus to build a better country that the late President John Magufuli envisioned.

She said she was grateful for the support and comforting messages that she had received from across the globe but especially from the opposition parties within Tanzania.

‘This is a time to mourn, to stand and unite as Tanzanians. It is a time to forget and bury our differences and be as one nation, a time to comfort each other and wipe our tears as we show love, peace and democracy.” Madam President said.

Samia asked all Tanzanians not to look to the future with doubt but great hope that the country will forge ahead into greatness.

Born on January 27, 1960, Suluhu was an MP for Makunduchi constituency from 2010 to 2015 and has been Minister of State in the Vice-President’s Office for Union Affairs since 2010.

Suluhu was born in the Sultanate of Zanzibar and after completing her secondary education in 1977, she was employed by the Ministry of Planning and Development as a clerk.

She schooled in Zanzibar and studied statistics at the Zanzibar Institute of Financial Administration.

Suluhu later joined Mzumbe University where she studied Public Administration before joining the Institute of Management for Leaders, Hyderabad in India for a course in management.

Later, she went to the United Kingdom where she did a postgraduate diploma in economics at the University of Manchester.

In 2014, she served as the vice-chairperson for the Constitutional Assembly which was tasked with drafting Tanzania’s new constitution.

Suluhu is married to Hafidh Ameir, a retired agriculture officer, and together they have three sons and a daughter.

Ther daughter Mwanu Hafidh Ameir is a member of the Zanzibar House of Representatives. 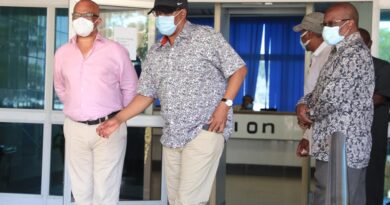 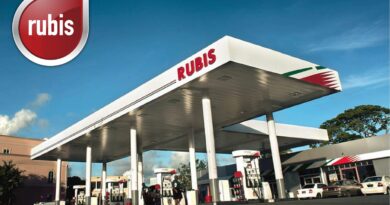